This is your friendly neighborhood exmuslim.  A few weeks or so ago, I received a vague threatening comment from a certain individual.  He didn’t like a joke that I made about Prophet Muhammad. In return he said “We leave Allah to deal with him in a way our minds cannot fathom. Sameer, you are a total scumbag. What an ignominious end shall befall you, and you will know it too when the moment is upon you” 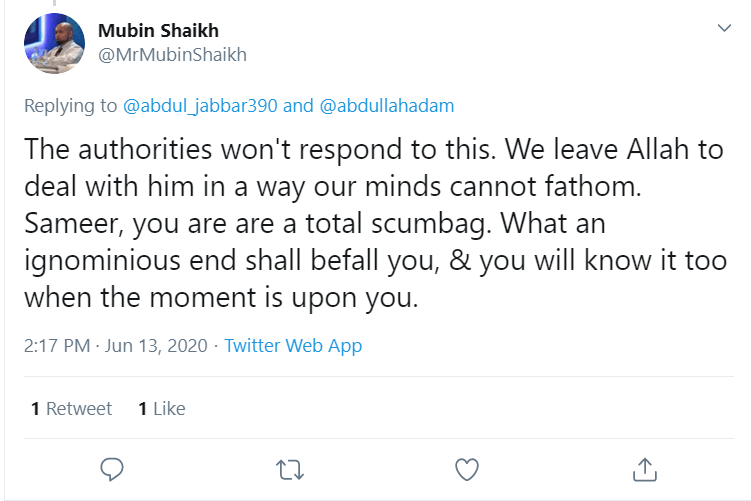 Now this could be a totally harmless right?  Maybe he’s just wishing Allah to punish me.  Maybe give me a disease or something.  In that case, I have nothing to fear cuz Allah isn’t real. Many of my followers actually thought that this is totally harmless.  Nothing to worry about.

The thing is, this is not the first time I’ve received such a message.  Sometimes “Allah will deal with you”, especially when posted publicly can be a dog whistle to other extremists. It’s kinda like a “hey, this guy is causing problems for us. Can you do something about him wink wink” . Or maybe that’s not what it was.  But when you receive threats, you have to at least consider them carefully.

I’ve been called enemy of Allah so many times.  My Muslim friend of 10+ years said he wouldn’t help me move because I had a blog. My boss has received calls at my work complaining about my activism.  I still remember I had an Egyptian tell me he would follow me to Canada and kill me. 5 years ago. And I still remember it.  Maybe its nothing to worry about.  But the mental toll is there.  These results don’t come for free. You pay a price.

When people ask me why I took these vague comments about an unseemly end as a threat, it’s because there are legit psychos out there who will take criticisms on Islam far too personally.  A friend told me the story of his chemistry or biology professor in Pakistan who read out the Kaaba bin Ashraf hadith in class when the whole cartoon thing happened. That’s the one where Muhammad sent two companions to lie and assassinate the Jewish leader Kaab for writing poetry against him. It’s right there in the Islamic texts.  The two men who were friends of Kaab from before lied to him and then murdered him.  Muhammad approved of the whole thing.

So when someone makes vague threatening comments, the other treats made to me come to mind.  Even my Muslim friends warned me that if I become an activist, I have to watch out for psychos. It’s not a joke.  Actual people have been murdered.   The Egyptian German exmuslim Abdel-Hamed Samad has a bodyguard at all times for this very reason.   Personal safety can’t be taken for granted

After this happened, a Facebook friend got threatened by an Indian Muslim.  It said “If you mock our religion then we are not going to [be] silent. Walk nude, engage in pedophilia and incest and homosexuality, we have nothing to do with your desires, but if you mock and taunt our religion we will rip off your ass with [an] axe”.  Again, points for creativity here.  He sounds dumb but serious. He used his real name to do this. When someone takes such actions with their real identity and not a troll account, it’s worth taking a bit more carefully. 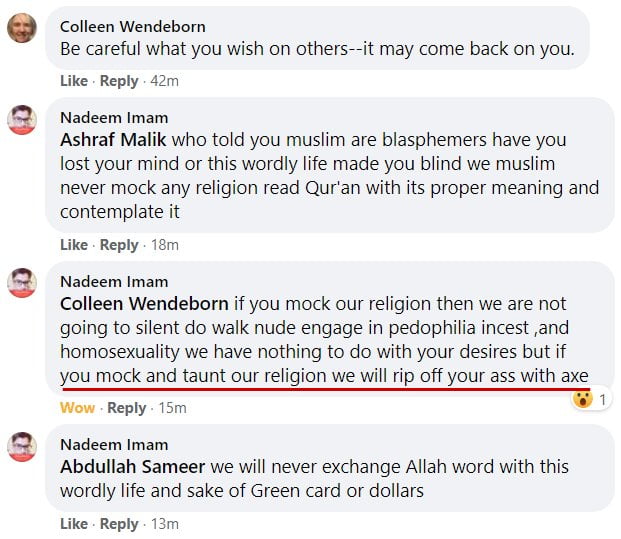 Some of the most brave people I know are Pakistani Exmuslims.  For some reason, at the moment, Pakistani Muslims seem to be the most dangerous butt hurt group of them all. They get really really offended about people criticizing their religion.

This gamer published a video targeting Harris’s family. In the video he  uses almost the exact same words as those of that Indian Muslim above “…that if you talk about women’s rights and being naked that’s fine, but don’t talk about my prophet is my family. So if you talk about my family, I will go after YOUR FAMILY.”

Harris’s family, which has nothing to do with his activism is being threatened by this bully.  The gamer admitted on video that he stalked Harris’s mother, his sister, and his wife on Instagram. He downloaded all their pictures and everything. He said he will morph his wife’s photo (whatever that means, I guess post vulgar edits of it), kill his dog Charlie, and then slaughter them live on TV.

If that wasn’t enough, he says he knows where Harris lives, and will share it with Muslims (Islamists?) living in Melbourne. That should be evidence enough for anyone that this is the shit we go through for this work.  And if you don’t take this seriously, maybe one day you will end up beaten up or dead.  So we do take it seriously.

Thankfully there are laws against this sort of thing.  We don’t live in the lawless Pakistan (or another country like Maldives or Kenya) where threats against apostates are laughed at and not taken seriously.  Where the government looks the other way and winks. Where when you complain about threats, you are the one sometimes arrested.  Over here ,we have our rights. We get justice. When I was in Saudi, or in Egypt, you get walked all over.  Over here, you can complain about discrimination and get compensated for unfair treatment.

In this case, the police  got involved and this story has gone far and wide. This gamer has made all his videos private and taken down his Facebook page temporarily until the heat dies down.

The law enforcement agents where able to track down and locate the gamer who was making threats to Harris Sultan. The gamer issued an apology to Harris and they have reconciled. Also, they have agreed that this gamer use his platform for good by encouraging secularism and tolerance towards people who hold different beliefs.