This is your friendly neighborhood ex-Muslim. A while ago, a Muslim by the name of Wasim on Twitter showed in two tweets just how one-sided Muslims can be. He demanded ex-Muslims condemn the heinous murder of three Muslims committed by an ex-Muslim.  Yet when he was asked to condemn the killing of apostates, he was silent.

The irony of irony is that Muslims are some of the first people to cry “Islamophobia” when Islam is criticized.  We surely can criticize Islam, but that we shouldn’t fall into bigotry.  People who have been following my activism and online content know we need to be fair with our criticisms of Islam, criticize it for its actual positions and not strawman it, and not unfairly demonize Muslims.  This is something I’ve shouted from the top of buildings.

My friend Sohail Ahmed, who goes by the moniker Reason on Faith, on his blog says, “I don’t support anti-Muslim bigotry, and neither should you.”

Muhammad Syed the president of Ex-Muslims of North America tweeted

“I criticize Islam, but I am disgusted by (and will stand against) anti-Muslim bigotry. If you care about a fair and thriving society, you should know and respect the difference.”

Maryam Nazamie, the cofounder of Council of Ex-Muslims of Britain, tweeted:

So let me ask you Wasim, would it be fair when an Islamic terrorist blows up a building that we demand that Muslims need to condemn it? Especially when we already know their position?  Of course not.

“Why hasn’t a single ex-Muslim big name on twitter condemned this yet? Terrorists”

Terrorists? We are terrorists? You think what he’s saying here is bad.  Just wait, it gets worse. Here is a screenshot from Waasim’s Twitter account: 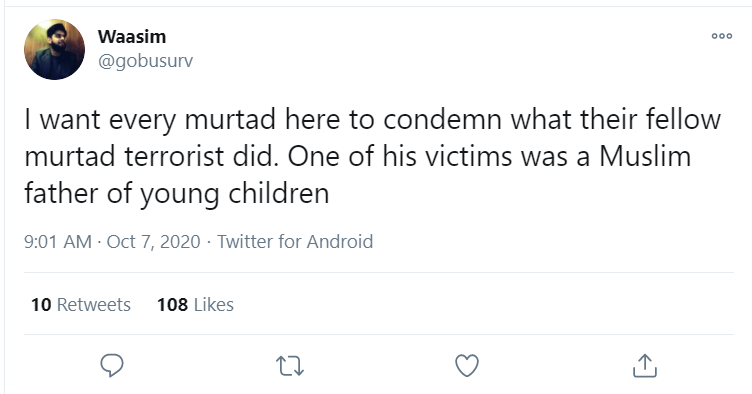 Just to be clear, the killer he is referring to, Hassib, is probably not a terrorist, because there is no known motive for why he did this. The sheriff’s office does not believe it was a hate crime.  He walked into an Afghan supermarket and killed 3 people and then himself.  The investigation is still ongoing but so far no ex-Muslim terrorist groups have claimed credit for this.  Wait, there is no ex-Muslim terrorist groups period. What he did was heinous but it doesn’t appear to be terrorism.

So he wants every single murtad (again, the use of a slur towards ex-Muslims) to condemn what this man did?  Isn’t that a WTF moment?  Why would *we* need to condemn what *he* did?

We don’t have a religion in common, a holy book, anything.  So why are we responsible?  Why accuse us of this?

Then Waasim tweets the following: 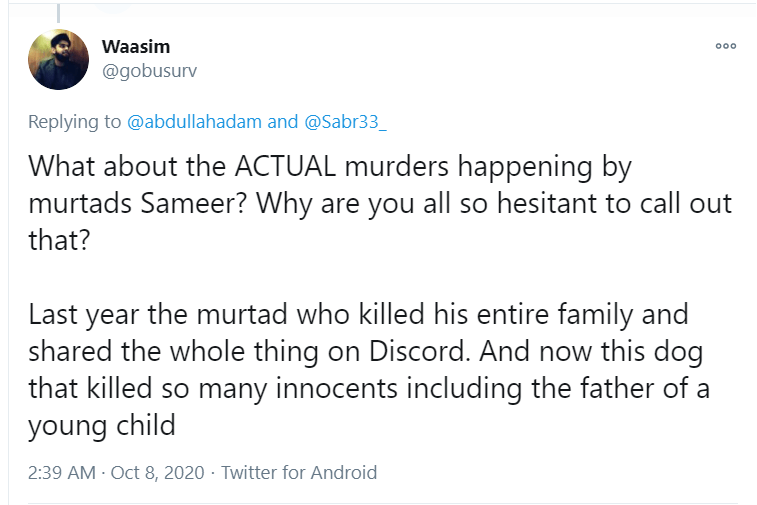 Should we ask every single Muslim to condemn every terrorist attack done by fellow Muslims?  How many times has an ex-Muslim gone and killed Muslims?  As far as I know just a few times.  But then again, even though I have a track record of condemning Muslim bigotry, and he even admitted that in a tweet here:

“I go out of my way to make sure my followers don’t demonize all Muslims”,

I didn’t have any problem condemning this.  I tweeted:

“Oh, you want me to condemn them? Absolutely. It is *completely* and *utterly* wrong to murder someone for simply belonging to a faith, group, gender, or sexual orientation. I condemn what those individuals did. That wasn’t so hard! Now can you do the same regarding apostasy laws?…”

And then I got a response.  Omar tweeted:

“Nope. Shari’ah is Shari’ah. We don’t live in a Muslim country so why is this even being discussed“

“Sameeeer… I don’t owe an explanation to you. There is NO aspect of the Shari’ah I disagree with. I am against vigilante justice, and taking the law into one’s own hands”

So he’s against vigilante violence, but he has no problem with apostates being killed. You see the double standards here?  They show the world how one-sided their standards are. It only applies to them. If someone kills a Muslim, we should rightly be upset and condemn that. But if ex-Muslims are killed BY THE STATE, that’s okay. We will not condemn this barbarism. It’s part of our religion.  Ali Dawah even said he’s proud of this.

This is why Islam is garbage. It’s a supremacist ideology that puts kuffar, dhimmis, apostates, homosexuals, and even other Muslim sects down.

To prove my point even more strongly, when I asked Waasim why they twist up our names like calling Gondal “Dongal”  Waasim said

“No Muslim would ever respect Dongal or Apus or you, to be honest, isn’t that a given?”

You know when non-Muslims call Muslims Muzzies or Mohammadans, I always remind them not to do that. Yet these guys can’t even have basic decency with us and still expect us to want to talk to them.

I will repeat myself once more. Islam is a supremacist ideology that puts down others. It is bad for our world. It is the only religion I am aware of that if you convert to it, you can legally be killed for leaving it in an Islamic state. Wasim angrily demanded all of us to condemn the killing of Muslims while at the same time refusing to condemn his own evil ideology that kills others in the name of protecting the religion.