You need to add a widget, row, or prebuilt layout before you’ll see anything here. 🙂

I received some comments recently about a certain type of video that we’ve been making in particular the ones were mocking Islam. Here is the tweet: 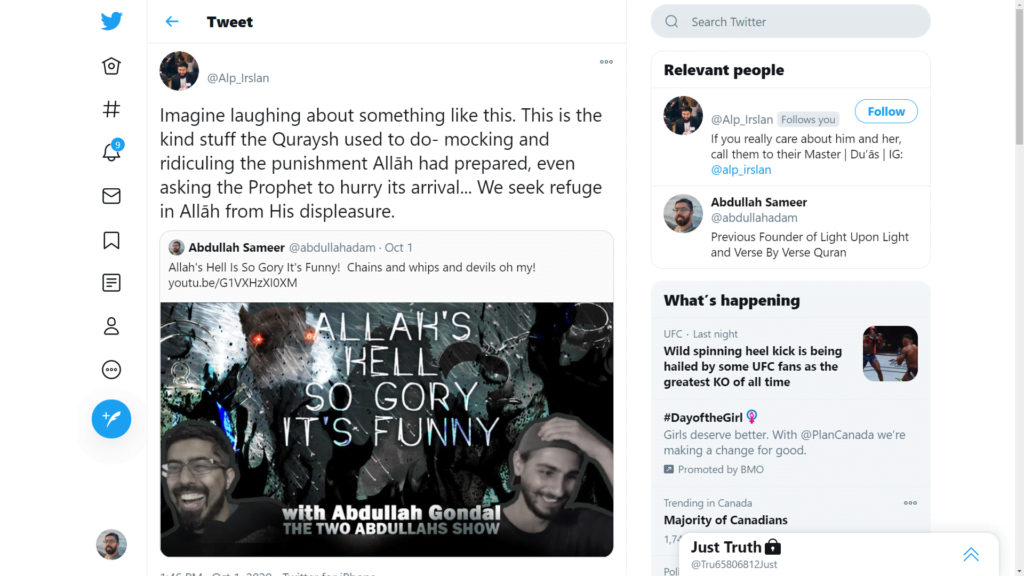 This was a response to my initial tweet in which I had said, “Allah’s hell is so gory it’s funny! chains and whips and devils oh my” So the question is why did we mock hell? Why are we mocking religion? Why do we mock the idea of hell?

The funny thing is when he says that Quraysh used to ask Muhammad to bring on Allah’s punishment,  it didn’t happen. So who cares? What’s the big deal? So we make fun of ideas because we want people to see that there are silly ideas and we don’t want to take them seriously. Why take the idea of hell seriously when it’s actually just a manufactured idea? It’s not real.

When I left Islam, one of my family members was talking to me and she started crying. She said, “Oh you’re gonna go to hell”. I had to hold myself back from laughing because for me it was so silly. The idea that I’m going to be tortured in some hell simply for not believing is ridiculous. I don’t believe in any of the religions. I just don’t think they’re true. If I thought it was true, I wouldn’t have sent forward this message to everyone. I wouldn’t have “misguided” my family that Islam is not true. I wouldn’t want to take anyone else with me to a real hell.

Hell is an idea that uses your self-preservation instincts against you. It’s an idea that doesn’t just exist in Islam, but in particular, we were making fun of the Islamic hell. The Islamic hell with the food where you have heads of devils – whatever that means. I don’t know what devil heads taste like but it sounds like a kind of candy that my kids would eat. Devil heads candy – the ones with exploding sour candy.

Also, the idea that you’ll be getting boiling water is equally stupid and manipulative. It’s so manipulative because it requires us to believe in a God that’s gonna throw us all in this unimaginable torture because we didn’t believe in him and bow down to him five times a day. But I just wasn’t convinced of his existence.

Then, of course, there’s the issue of the unfairness of the test. People born into Muslim families will have a much smaller test than that of people born to Hindu families. A majority of people tend to follow the religion that they’re born into. Does that mean people born to non-Muslim families are just out of luck? The whole thing is just unbalanced and seems man-made to me. You gotta wonder what kind of god would do this what kind of god would throw the dice in such a way that some people are more likely to end up succeeding and some people failing. And it doesn’t make sense at the end of the day right he’s going to torture everyone who failed when it was out of their control.

It is a completely flawed idea coming from flawed reasoning that I think should be made fun of. Now, I do realize that mocking something might not always be the best way to tackle this issue. Sometimes it’s better to be respectful to ensure productive dialogue.