For those of you who know me you know that there are certain things I cannot stand for. I am against the religion of Islam and what it brought to the world, but I don’t let people get away with bigotry. Robert Spencer of Jihad Watch, the “The Muslims are Coming” man who is constantly looking for jihadis under every bed and in every closet is here to warn us about an ad for Turkey. Yes, an ad for … turkey. I am going to be responding to his video in this blog post.

Apparently the supermarket chain Tesco has an agenda to spread jihad by having  hijabi women in their ad. He then goes and reminds us that even peaceful Muslims can turn to jihad and attack their Christian neighbors so we can’t accept this! They take 1 turkey ad, the next thing you know we’re the turkey! His anti Muslim radar is so high that even the sight of a hijabi in an advertisement is enough to push Spencer over the edge into action! Call the brigade! A Muslim woman was spotted on TV.

To Spencer, this innocent ad for turkey is not so innocent after all. They have a sharia agenda. An agenda to push turkey, I mean Islam into every household in Britain. It’s a 1 minute long ad , and from the 1 minute guess how much of it features these Muslim women? 2 seconds. That is right. 2 seconds of a Muslim in this ad was enough to push Robert into taking action.

Robert goes on to vent about Maajid’s criticism of the outrage saying it is based on racism. He tries to counter this criticism by saying  that Islam is not a race. Yes, objecting to Muslims in a Christmas ad is not racism. However, it is bigotry you dumbass.

Oh by the way, there was a Sikh in the ad too. 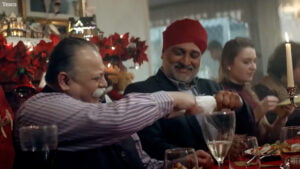 Did you have a problem with that as well? But seriously, how can  Robert claim that Tesco obviously has a hidden agenda in putting Muslims in an ad? Dude, Muslims do their Christmas shopping at Tesco too. Tesco’s AGENDA IS TO SELL MORE TURKEY! That’s why the supermarket chain made the video.

He goes on to say the main agenda for the is to push down the existence of Muslims down everyone’s throat and anyone who complains will be deemed an Islamaphobe. So you just admitted you are not comfortable with the presence of Muslims in Britain and you want all Muslims out . Thank you for being honest. What do you think is the solution Robert? How can we get rid of all the Muslims? Surely we can’t take for granted that Muslims are here to stay right? What should we do? Deport them? Jail them?

In Robert’s view, this ad  is Propaganda and manipulation disguised as an ad for turkey. ITS A FREAKING AD FOR TURKEY WITH 2 A SECOND SHOT OF MUSLIMS IN IT SMILING. TWO SECONDS YOU SITTING POPSICLE

By  this meltdown Robert, you  didn’t just prove Maajid right about wanting a white nativist Christmas. You just exposed yourself even worse. You don’t just want a white Christmas, you want a Muslim-Free Britain.

I’m not going to call you a Nazi, even though I’m tempted after what you just admitted. But how can we take anything seriously from your mouth after you’ve shown that an ad for turkey pushes you over the edge into “WATCH OUT THE MUSLIMS ARE COMING”?

In the same video Robert goes on to allege that non Muslims are concerned about jihad terror and Britain will become a Sharia state. You are telling me, that this TURKEY advertisement shows you that Britain will become a sharia state? That Muslims in an ad for turkey smiling at Christmas is a sign of the impending doom that’s going to face the non-Muslims in Britain?> Nobody is challenging Muslims to work for reform. As if this was not enough shallowness, Spencer asserts that the government is not taking the issue of violence in Islamic communities seriously and that no Muslims are working to reform Islam. If you continue watching the video, Spencer goes on to say, “…Muslim reformer Maajid Nawaz is enraged..” Hold on. What did you call him? Muslim reformer? So what do Muslim reformers do? Do they uhhhhh try to reform Islam? Nahh.

There is a point here to be made about rape gangs  and official not fully enforcing  the laws . The vast majority of child sex offenders in England and Wales are male, with men representing 98% of all defendants in 2015/16, and  whites men representing 85% of convicted child sex offenders and 86% of the general population in 2011. But the prosecutor himself did admit that the police were hesitant to pursue due process against south-Asian minorities for fear of looking bad. And it’s problematic. We definitely don’t want that to happen. So if you’re worried about a rape epidemic Robert, you should start with white men.

Another issue that Robert rises is that of authorities allowing  extremist Muslim preachers to come and spread their teachings in Britain. But here is the problem ,  there’s a list of Muslim Speakers banned from UK: Zakir Naik, Bilal Philips, Omar Bakri, Yusuf Qaradawi, and Mohammed Al Deeni were banned. And guess who else was banned? ROBERT SPENCER. YES, HE WAS BANNED FROM THE UK. OH THE IRONY.

If you are against an Ad with Muslims, Sikhs, Hindus, gays, blacks, atheists, white people, Chinese or anything else you are acknowledging your racism and bigotry towards those groups. How can this be so hard Robert?

According to Robert, celebrating Christmas is not enough integration. So basically they are not integrating until they completely condemn every terrible thing in Islam. Here’s the thing Robert. Muslims celebrating Christmas IS a huge step. But like Maajid said, you don’t want to acknowledge any sort of point in favor of Muslims, because your game is to demonize them. You want to demonize Muslims no matter how irreligious, secular or agnostic they are.

You are willing to throw Muslims under the bus, even if they are at the point of celebrating a kafir festival with pagan roots (that is now somewhat secular) that you still deny this is a sign of integration.

Muslims in many different ways to some extent or another do deny the terrible things in Islam. This is definitely the case. Either they outright condemn ISIS like the ones who signed Letter to Baghdadi, or they will say that most of these rules are out of context or no longer to be applied, or only to be applied in an Islamic state which doesn’t exist. Some will still fundamentally believe these rules are valid. So we still have a lot of work to do, and a long way to go, but all this based on a 2 second clip of hijabis smiling in a Christmas ad?

Robert’s narrative is that even though that smiling Hijabi woman has been a good neighbor and her kids play with your kids and she said merry Christmas to your family and even gave you a nice bottle of wine, you better be ready, because when the call for jihad will come, she’s gonna knock you over the head with that bottle and stab you with it. To support this narrative  Robert just  found 2 or 3 examples and he is  trying to say that you cant trust any Muslim in Britain because of this? I think there should be something called “jihadi under my bed syndrome” because Spencer definitely has it. And I’m not even denying the problem of Jihad.

Robert ends his video by asking the questioning what is Maajid doing to help the situation. Well here is my response : He’s doing a lot more than you. Instead of demonizing Muslims Maajid talks to them and engages and dialogues and debates in order to win them over. He’s doing the very thing you said Muslims aren’t doing – reform.

I want to make my position on jihad very clear. I am not saying that jihad terror is not an issue. That we should not worry about jihad, that ISIS has nothing to do with Islam, that Islam is peace. No, I am not saying that. Islam is a doctrine that contains many violent and dangerous teachings in some of its strains. The doctrine of Jihad, the doctrine of Martyrdom are a stain on our world today. Many of the victims of Jihad violence in the world today are Muslims. Many Muslims suffer greatly under ISIS, under Boko Haram and others. They are compelled under violence to join the group or die. But many willingly join these groups. When you have someone like John Georgelas who spontaneously converted to Islam from Rural Texas and became one of the top members in ISIS you have to admit that Islam has a dangerous side.

But the way to defeat this evil ideology is not by fearmongering against turkey ads and scaring people into hating Muslims. The way to defeat it is to defeat the religion at its core. To fight its core beliefs and to show its dark side for everyone to see clearly. This is how we will defeat jihad. I know, because I’ve had a jihadi contact me and tell me that Abdullah Gondal and my content helped him to see the light and leave a terror group. I know that the efforts I am making have deradicalized at least hundreds if not more.