As a Muslim, I used to think evolution was a farce.  I never looked into it and believed Harun Yahya’s propaganda wholeheartedly that it was a materialistic conspiracy.  After leaving Islam I decided to take an honest look at it again, and the evidence is overwhelming and clear that evolution is real.  This post describes the evidence from Muslim scholars and scientists to prove without a shadow of a doubt that the theory of evolution is accurate and true.

Take a look at this short video on evolution to start.

How about this alternative text of the Quran? Couldn’t we say this is actually more accurate and clear than the current one?

“It is we who formed you as simple creatures, and then molded you into complex ones until you became self apparent and were aware of your own selves. Will you not give thanks?”
(Written by me)

Instead we are given a mythological story of “Adam and Eve” and “separating the heavens and earth” and “raised up the heavens” and “held up the sky” story that we have to retrofit evolution into and modern science against when the apparent meaning is so wrong and outdated.

And then we claim God sent this book? Didn’t he know about evolution and the formation of earth billions of years after the universe?

Is the idea that humans evolved from non-human ancestors scriptually valid position in light of Quran and Sunnah?

Yasir Qadhi recently tackled this topic here and this is what he said:

There is almost consensus in the scientific community that evolution is a fact. That its not just a theory but its actually a fact. All life as we know it originated from a common human ancestor and it’s only opposition is coming exclusively from religious circles who view their scriptures as providing an alternative explanation as to the origin of life.

The Quran and Sunnah present a position that is beyond dispute while science presents an interpretation of data that conflicts with that data.   We must resign ourselves to say “Allah knows best”

I firmly believe that Islamic texts are clear on the origin of man – both the Quran and Sunnah show that humankind descended from Adam and Eve, they were the first humans created directly by Allah, not born to parents or evolved from previous lifeforms.  Any attempt to contradict or modify this Islamic argument is scripturally indefensible, historically flawed and methodologically shallow.

The entire corpus of Quran and Sunnah paints such a vivid picture of the story of the Adamic creation, that to claim that man descended from other creations is to make a claim that contradicts explicit numerous statements from the Quran and dozens of authentic hadith from the Prophet.

Now, had the story of Adam been on a lone ambiguous text that allowed multiple linguistic interpretations and modern science informed us that a particular interpretation is more plausible we as rational Muslims would adopt that interpret.

We have such an explicit narrative, one that is deeply rooted in countless passages of Quran and Sunnah but no choice other to accept that this is what Allah and his Prophet intended for us to believe. The sheer quantity and diversity of nouns, adjectives, and verbs used simply makes any linguistic reinterpretation or ta’weel so imaginative and so fanciful that renders such an endeavor mere mental gymnastics.

Frankly there is no logical way for a Muslim to contradict this entire account A-Z, verse by verse, hadith by hadith, except by claiming that the whole story is a fable, its allegorical, and not meant to be understood at face value.

Such a claim might actually make more sense logically, but its leads to disastrous and blasphemous implications about Allah and his truthfulness and the function of the Prophet and role of the Quran.

The evidence are too numerous to mention regarding this.  But here is a few.

The Quran states that all of us are children of Adam and Eve:

O mankind, fear your Lord, who created you from one soul and created from it its mate and dispersed from both of them many men and women. And fear Allah , through whom you ask one another, and the wombs. Indeed Allah is ever, over you, an Observer. (Quran 4:1)

And the Quran describes Adam as being created with a single word:

Indeed, the example of Jesus to Allah is like that of Adam. He created Him from dust; then He said to him, “Be,” and he was. (Quran 3:59)

The hadith literature talks about Adam being formed with Allah’s own hands.  (Bukhari and others)

There you have it.  So Adam did not evolve, he was created.  This creates a lot of problems for someone who is a believer now.

It is difficult to imagine that merely two parents gave birth to all the different races of human beings. And, despite what Sheikh Yasir says, it’s also difficult to wrap one’s head around the excessive incest this scenario entails – barring mental gymnastics. The theory of evolution presents a far more plausible explanation. Many people today possess Neanderthal genes and there’s good evidence that our species coexisted, fought and mated. So how could Adam and Eve be our only original parents? I’m probably missing something here about the miraculous nature of the rise of the current genetic variation that modern homo sapiens possess

Professor Ehab Abouheif, who is also a Muslim, gives overwhelming evidence for evolution.  I was blown away by his presentation.  He is Professor at Department of Biology, McGill University where he researches the evolutionary and developmental biology of ants, and made some major discoveries on how the environment can resurrect super soldier ants and to dial up and dial down the size of ants.  You can read his Reddit AMA he did on his research here

You could also hear Dr Fatimah Jackson talk about why she believes evolution is true.  As a believer she sees no contradiction between evolution and God.  Dr. Fatima Jackson was a professor of biological anthropology at the University of North Carolina at Chapel Hill (UNC). She now teaches at Howard University in Washington, She became professor emerita of applied biological anthropology at the University of Maryland after teaching there for 20 years.

Dr. Mohamed Ghilan, a student in neuroscience says the following:

Next, Dr. Rana Dajani, Ph.D. in molecular biology, University of Iowa, USA explains why it doesn’t make sense to take the story of Adam and Eve literally.

The Genetic bottleneck with Adam & Eve

Jerry Coyne of “Why Evolution is True” writes:

The scientific evidence shows that Adam and Eve could not have existed, at least in the way they’re portrayed in the Bible [or Quran]. Genetic data show no evidence of any human bottleneck as small as two people: there are simply too many different kinds of genes around for that to be true. There may have been a couple of “bottlenecks” (reduced population sizes) in the history of our species, but the smallest one not involving recent colonization is a bottleneck of roughly 10,000-15,000 individuals that occurred between 50,000 and 100,000 years ago. That’s as small a population as our ancestors had, and—note—it’s not two individuals.

Further, looking at different genes, we find that they trace back to different times in our past. Mitochondrial DNA points to the genes in that organelle tracing back to a single female ancestor who lived about 140,000 years ago, but that genes on the Y chromosome trace back to one male who lived about 60,000-90,000 years ago. Further, the bulk of genes in the nucleus all trace back to different times—as far back as two million years. This shows not only that any “Adam” and “Eve” (in the sense of mitochondrial and Y-chromosome DNA alone) must have lived thousands of years apart, but also that there simply could not have been two individuals who provided the entire genetic ancestry of modern humans. Each of our genes “coalesces” back to a different ancestor, showing that, as expected, our genetic legacy comes from many different individuals. It does not go back to just two individuals, regardless of when they lived.

Check out this video on the fossil evidence for human evolution:

The evidence from archeology 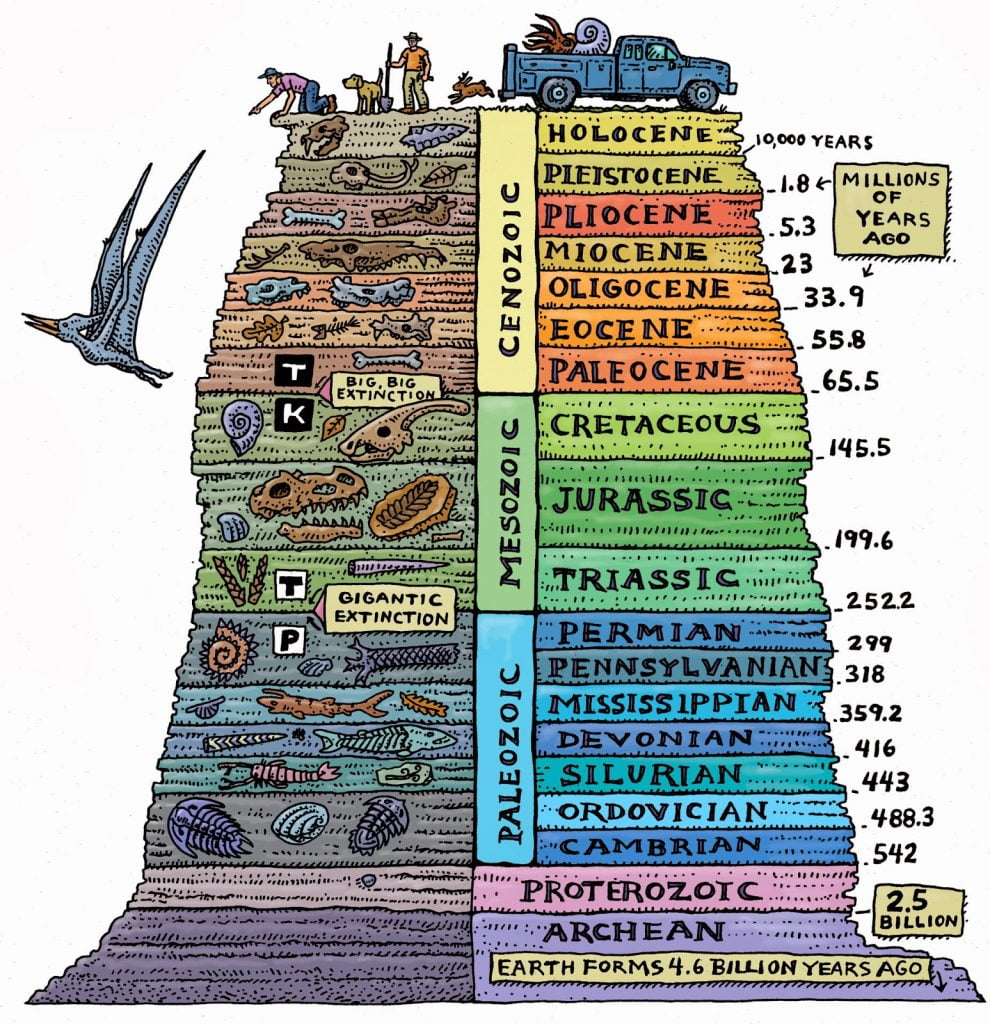 Dawkins in The Greatest Show On Earth writes:

If fossils of living things were found randomly in all ages of rocks, with rabbits, birds, and flowering plants in the earliest strata, evolution itself would have to be abandoned as an account of how the different kinds of living organisms came into existence.  It is a fact that literally nothing that you could remotely call a mammal has ever been found in Devonian rock or in any older stratum. They are not just statistically rarer in Devonian than in later rocks. They literally never occur in rocks older than a certain date.  Evolution, in other words, is a falsifiable, and therefore scientific, theory.

Evolution could so easily be disproved if just a single fossil turned up in the wrong date order. Evolution has passed this test with flying colours. end quote

What do you think?